In this interview, James M. Lang catches up with Derek Bruff, the author of Intentional Tech: Principles to Guide the Use of Educational Technology in College Teaching and learns more about the book’s origins. 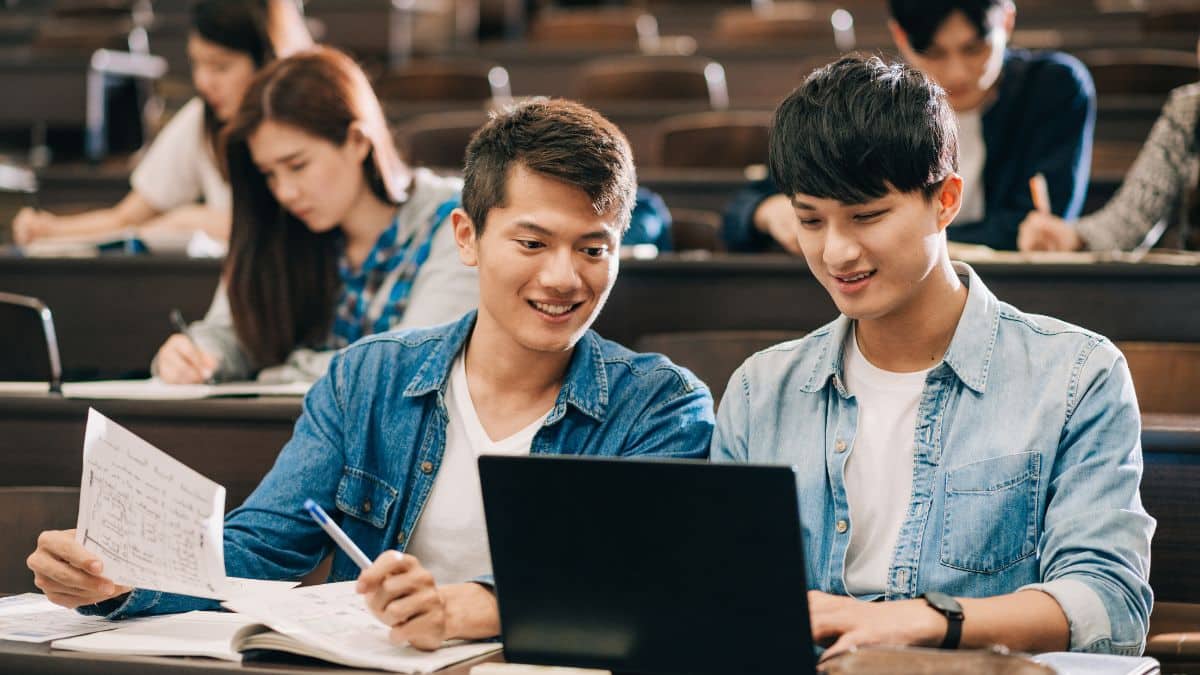 Derek Bruff is one of the most trusted and thoughtful voices in the field of educational technology. Faculty typically learn about new technologies from vendors, or from tech enthusiasts sharing their passion for all things digital. Bruff asks us to step back and think before we bite on a new app, device, or program. But while he’s tech-cautious, he’s not a technophobe. His previous book was a celebration of all the creative ways that teachers could use tech to promote learning with personal response systems. Intentional Tech likewise marries his careful approach to educational technologies with lots of ideas about how to help students learn with them. You’ll discover plenty of useful tech tools in the book, but you’ll never be far away from the fundamental principles of learning that should animate the work of teaching.

1. I’ve come to believe that great nonfiction books respond to an important question. What question were you trying to answer in this book?

Education, like so many other industries, is responding to a rapidly changing technology landscape. There are so many new technologies, especially internet technologies, that present themselves as options to faculty for use in their teaching. There are plenty of resources out there for instructors to learn how to use a given technology, but my book addresses a different question: Why should one use technology in one’s teaching? Technology in any field is good for some purposes and not good for other purposes. My goal in writing Intentional Tech was to help educators figure out where and why technology can help them be more effective teachers.

I remember that interview! That was a while back. I think my journey started in graduate school when I had the chance to see Harvard physics professor Eric Mazur talk about his use of technology in his classroom. I had seen technology used before to help instructors do the usual things more efficiently, like distributing handouts through a course website or calculating grades in a spreadsheet. But Mazur was using technology to create a new kind of learning experience for his students. The technology enabled him to do something that would have been difficult or impossible without the technology. Those are the kinds of uses of edtech that have fascinated me ever since.

3. Writing a book is a big undertaking, especially when you are trying to balance it with teaching and administrating. How did you accomplish it? What was your writing process like?

In the acknowledgements in my book, I give a shout out to the Frothy Monkey coffee shop in Franklin, Tennessee. That’s where I wrote most of the book! I found that to get a good bit of writing done, I needed to take two days away from my day job running a teaching center with no meetings at all. For the first half day, I would just catch up on email and tasks that needed to be done. By the afternoon of that first day, however, I could dive into writing, and the second day was even more productive. I had previously tried to write in one-or two-hour chunks, but I found that was only good for conducting interviews for the book or organizing my notes from those interviews. To really put words to paper, I needed at least two working days in a row.

4. Can you give readers a few examples of some of the principles that should guide teachers and institutions as they make decisions about educational technologies?

The first teaching principle I discuss in the book is what I call creating a time for telling, after Schwartz and Bransford: “Giving students a hard problem or challenging experience can help them get ready for learning.” There are lots of ways to do this, and technology can help. For example, you might ask your students a multiple-choice question that’s in that Goldilocks zone between too easy and too hard. If you are using a polling tool of some kind, you can get an answer from every single student and put those answers in a bar graph. When your students see that half the class has missed the question, but the other half answered correctly, they’re in a great position to want to know why the right answer is the right answer.

Technology is also good at making visible what Randy Bass calls “thin slices” of student learning. The teaching principle here is, “The more we understand what and how our students are learning, the more responsive we can be to their learning needs.” As one example, I profile biology professor Margaret Rubega in the book. She teaches a class on ornithology, and she asks her students to go on Twitter and tweet about the birds they see as they are traveling from home to class to work. What she’s really asking students to do is to transfer what they are learning in the classroom to other, new contexts, which is a key goal for education. And she’s asking them to use technology, a social network in this case, in a way that makes their learning visible to her, so that she can respond and provide useful feedback.

5. How can readers connect with you and learn more about your work? Are you available for in-person and virtual workshops?

The best place to connect with me is on my website, derekbruff.org. There you can read my blog, sign up for my newsletter, or subscribe to my new Intentional Teaching podcast. As for workshops, I’ve been fortunate to visit a variety of higher education institutions to give talks and lead workshops, all aimed at developing more intentional creative, and effective educators. I’m happy to offer on-site or online workshops on a variety of teaching topics. See my website for contact details and more information.

Excerpt from the book

As an instructor in Vanderbilt’s cinema and media arts program, Jonathan Rattner has always had students share their film projects with each other for purposes of feedback and critique. That’s a standard practice in the visual and performing arts. What’s less standard is having students share their work with students they don’t know at a college five hundred miles away. But that’s exactly what he did.

A few years ago, Rattner and a colleague from graduate school, Bridget Draxler, got an idea. He was teaching a course on documentary film history, production, and theory at Vanderbilt. She was teaching a writing course in the English department at Monmouth College in Illinois. His students were producing short, experimental documentary films. Her students were encountering and critiquing various kinds of media. Rattner and Draxler decided to create a course exchange through a shared course blog. Rattner’s students selected their works-in-progress to share on the blog, and Draxler’s students viewed and responded to the films in writing through the blog’s commenting tools. This pairing provided Rattner’s students an authentic audience for their work, and it gave Draxler’s students the opportunity to critique films in conversation with the filmmakers.

“My students were nervous,” Rattner told me. “But it took their work to a slightly more serious level.” He pointed to the importance of novice filmmakers sharing their work with an external audience. “It helps to break that imagined barrier that we all have that our creative work will be immediately disliked by people who don’t know us.” Rattner pointed out one student whose first film generated several thoughtful critiques from Draxler’s students. The film, a mediation on the purpose of college through the metaphor of wandering, worked as a “forum for dialogue and audience reflection,” which Rattner marked as a success. Moreover, the feedback and support from Draxler’s students gave the young filmmaker “the confidence to continue to push himself creatively and academically,” according to Rattner.

Building community across the two cohorts of students went slowly. That was fine, however, since Rattner wanted his students to share their work with strangers. As the students interacted on the course blog, however, they started to develop some connections, which were solidified when the two classes came together via Skype at one point during the semester. English students aren’t often able to ask questions of the authors and creators they study, but that was possible in this case, and the conversations across the two classes helped each group of students understand creative processes a little better, those used by filmmakers and those used by writers. The students were, of course, novices in their respective disciplines, which meant the collaboration had some limitations. Rattner said that he would like to pair one of his courses with another art class, perhaps, “so the critique would be even more rigorous.”

The course exchange experiment was successful enough that both Draxler and Rattner have explored similar pairings in subsequent courses. For instance, Draxler and Matt Lavin of Saint Lawrence University were both teaching Martin Luther King Jr.’s “Letter from Birmingham Jail” as part of separate first-year seminars focused on “ways of knowing in the digital age.”1 They loaded a copy of the text on CommentPress, a WordPress tool that allows social reading and annotation, like Hypothesis, mentioned in chapter 6. What followed was a multistep process: students in both classes annotated the text on paper independently, then collaboratively on CommentPress. Then the students discussed the social reading experience together via Skype, then each class on their own. Both groups of students had lively conversations about the “surrealness” of reading together with strangers online, connecting the experience to previous course texts about digital reading and writing.

Meanwhile, Rattner added an assignment to the cinema and media arts senior capstone seminar he teaches. In addition to giving talks about their work, designing professional websites, and completing short festival-ready projects, Rattner’s seniors also create educational blog posts for students in Rattner’s introductory courses. The seniors are asked to focus on some aspect of the major—production, theory, or analysis—that they find exciting and over which they feel some level of mastery. The blog posts must include some written component, as well as a multimedia component the seniors create, either from scratch or by remixing their own past work. Students have selected such topics as women in film, the long take, the artistic merit of music videos, and film editing tutorials for specific software.

Having students within a course share and respond to each other’s work can turn a course into a learning community, as we saw in the previous chapter. Broadening that learning community to include students in another course, perhaps at an another institution, can be a practical, engaging, and low-risk way to have students represent their learning for an authentic audience. Finding a fellow instructor to collaborate with might take some matchmaking, but given all the courses in all the disciplines happening at any given moment around the world, the possibilities are open-ended.

Hypothetical audiences, course exchanges .?.?. how else might you connect your students with an authentic audience? Well, you could ask your students to write for the fifth most popular website in the world.

Derek Bruff poses an important question to us: Why use technology, especially digital technologies, in our teaching? What does it help you do better? Tell others about your favorite educational technology and explain what it does for you in the comments section below.